…. a country that consisted of 565 kingdoms. Of these, the most flamboyant were the Rajput kingdoms confined to the western desert of Thar, now known as Rajasthan …. 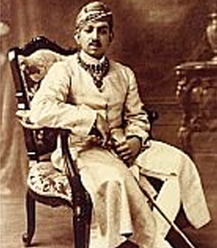 Over centuries, different dynasties ruled from different parts of the country, their kingdoms built on reciprocity with neighbouring kingdoms. However, it was under the Mughals, first, and the British, next, that an attempt was made to unify the land as one nation. The British oversaw a country that consisted of 565 kingdoms. Of these, the most flamboyant were the Rajput kingdoms confined to the western desert of Thar, now known as Rajasthan, though the Maratha and Sikh kingdoms were no less formidable.

In medieval India, a bigger and better fortification was the final power statement of the warring Kings. With British sovereignty finally recognised, wars and feuds amongst princely states gradually subsided. Accordingly, fortifications gave way to wondrous, architectural feats that would inspire awe on part of peers, subjects and colonial masters. Palace building became the passion and Art deco was to be its expression.

Sometimes, there were other reasons too. In a country such as India where nature takes its toll annually, as much because of droughts as because of floods, the rulers often commissioned their greatest architectural monuments — forts, palaces, and temples — to ensure employment and food for the poorest. And from situations of adversity rose great monumental wonders, some of the most exquisite the world has seen.

Members of the royal houses, and those of the aristocratic order that functioned just under them, drew up an elaborate system that reflected in a lifestyle that consisted of amazing discipline, of great opulence, and sometimes also indulgences. There were hunts and balls, but also elaborate ceremonies; marriage ceremonies sometimes lasted months, festivals were celebrated with great pomp, and the families ruled with benevolence that ensured the well being of their states. At the time of independence in 1947, all the states merged into the republic of India, and a modern, democratic nation was born. The royal families were derecognised by the Constitution of India in 1971, and their privileges withdrawn. Fortunately, the lifestyle they represented, ingrained over centuries, has remained untouched. Scions of the great dynasties that once ruled over independent states continue to live graciously, though they are now industrialists, professionals, and even hoteliers. The premium positions they occupied by birth have now been replaced by merit, but for those who have managed to convert their ancestral homes into hotels, the way of the past has become a charming reminder of the way their families once occupied different wings of their palaces. WelcomHeritage pays homage to that spirit through its umbrella of charming heritage hotels.

Send us a message